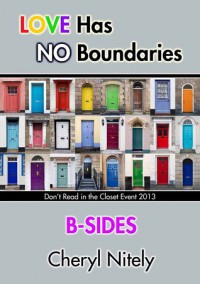 This short in the LHNB event really confused me. It feels more like the first 1/3 of a story with how it ended. Call me a simple m/m reader, but I need a couple to root for in getting their HFN or HEA. I was confused in this story. Should I be rooting for Wyatt and J.R. or Hite and J.R.??? By the prompt, it felt like I should have been cheering for Hite and J.R. Yet, I couldn't help but not love Wyatt and want him happy with J.R. and that's the direction I went. As someone who is NOT a fan of love triangles, it had me frustrated. If this is the first part of a longer story, I could deal with it knowing more was coming. No clues there.

The BDSM was lite and more kink oriented and fit these guys and their exploring. Wyatt was playful enough to pull J.R. out of his shell and there were some moments that really made me smile in them starting their relationship. Wyatt and J.R. seemed to come to an understanding that they were "exclusive and dating but not public" which seemed about right given how new the relationship was. However, the ending had love triangle written all over it. Is Hite going to go try to get J.R.? His thoughts about his so-called partner Brad had me wondering how truly serious they are.

The story up until its ending also had a realistic feel to it and I was liking it until the ending. In today's day and times, it still appears to be difficult for someone to come out in country music as gay. As a country music fan, I hope that is not the case but given how Chely Wright and the Dixie Chicks were both treated and how Carrie Underwood and others who support marriage equality get backlashed, I think there's a few more years to go to acceptance. I worry more about those in the older industry accepting someone who was gay versus the fans. The younger the fans, the less a deal I think it will be given increasing acceptance of younger republicans for LGBT.

The photo prompt was quite hot. I really do appreciate the author's time on this story - this one simply had me too frustrated to rate higher.
Tweet