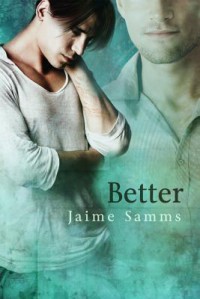 There are three things I can always count on when reading a Jaime Samms book: 1) I'll need a box of kleenex, 2) It will be a much more realistic portrayal of real life than most books I read and 3) It will be well written.

In this book, we have Jesse who is a couple years past a so-called dom who he had trusted when he was new to the scene and who had abused him. We see him still struggling, emotionally, to move on. He was a cutter during his difficult time and hides his scars. He wants to move on but it's obviously difficult. Along comes Aadon who has his own demons to deal with. Aadon has an older brother in assisted living from having been sexually abused as a child and buried himself in drugs to escape doing long term damage. Aadon's brother is now a shell of who he used to be and Aadon's parents have abandoned him leaving Aadon being his brother's only familial link. The two MCs have a lot of heavy stuff they are dealing with.

Jesse is in his 3rd year of college and Aadon is getting is law degree. When they meet, there is instant attraction. With a little pushing, Aadon asked Jesse out and Jesse goes determined to put his past fears behind him. That's easier said than done given his level of trauma. Because of Aadon's brother, Aadon picks up on clues about what Jesse has gone through and early in their relationship Jesse shares with Aadon enough for him to understand. Aadon then works to not push Jesse too far too fast.

This book is not about a magical overnight recovery that sometimes you see in books. This is a slow recovery for both MCs. Jesse has to eventually work to a point where he shared everything that happened to him when he was abused, some of which he hid because of embarrassment, and he has to stand up to his abuser again. Because he doesn't do that as early as he probably should, Aadon misreads some signals and there are issues. Jesse is a sub and eventually gets to a point where he doesn't blame himself for being abused and that these needs of his are healthy with the right person. Jesse has to allow himself to truly let Aadon in which means a full confession that starts the cleansing of his soul. He doesn't want Aadon to fight his battles for him, but rather to stand at his side and support him.

Aadon is fighting his own battles. He is a very patient person but can also have a temper when he gets frustrated by not being able to fix things. He's a take charge kind of guy that has to struggle with having to let Jesse take a lead in his own healing. Aadon is a dom and has naturally protective instincts. Aadon wants to take care of Jesse and is very tentative with Jesse not wanting to bring forth bad memories for him. Aadon has a lot of stress carrying the familial load as someone in his mid 20s with his brother. Stress he tries to hide because he thinks he should just handle it all and has to be strong. He wants to protect Jesse and goes too far in being so careful that it drives Jesse nuts because Jesse needs to move forward. The result is that too much happens too fast and they end up taking some steps back. Aadon's brother struggles a lot and Aadon develops a friendship with his brother's psychologist that greatly helps him as the book advances when he starts talking to her. Aadon also learns to eventually lean on Jesse, too.

Eventually, our couple takes a chance on the other, shares the secrets and doubts they have been hiding, shows each other's vulnerabilities and gets together in what has to be one of the sweetest and moving love scenes I have ever read in romance. Although we see Jesse's sub personality in the bedrooms sneak through at times with Aadon, and both Jesse and Aadon discuss what a healthy dom and sub relationship is, this isn't a BDSM book. Although it's clear a dom/sub relationship is something that the couple will eventually build to and both desire, neither are ready for it in this book. Baby steps.

There is not a lot of sex in this book. These guys don't just hop into bed because this is a book about healing; hopping into bed would have solved nothing for them. They have to get to know and truly trust the other. There are also a number of secondary characters that, normally, would have distracted me. However, I felt that it was pretty realistic given what has occurred that there would be a lot of overprotective people around getting into other people's business out of their own need to not see their friends hurt again. You also see that in their own way, Jesse and Aadon each have a very supportive family but it might not be the typical people of a mother, father and siblings.

Although Jesse's abuse all happens before the book starts and there is no violence of any kind in this book, there is discussion about the previous violence and abuse for those who want to be warned.

This book was so emotionally strong and incredibly well written. It's a heavy read because we see the couple make mistakes, there is miscommunication because each is bogged down in their own feelings and history but it is clear that each is the other's destiny. They were meant to find each other at that time of their lives to help the other move on and into a healthy relationship with each other. They become each other's strengths while still fighting their own battles.

This is a tough, emotional book. But, in the end, it's positive of how people can overcome the bad things that happen and be happy again. Even though I used a box of kleenex on this book, I loved it. Great, great book. 5 stars. Hope we get more on these two and their friends.
Tweet