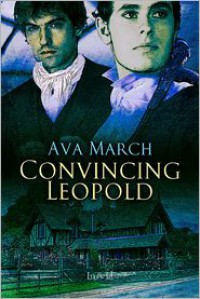 Let me say up front that Ava March's Bound series is an all time fave of mine. This book is a follow up to Convincing Arthur with the same couple three months into their relationship. Thorn is one of those delicious rakes who is reforming for love and Arthur is the serious working guy not quite believing the rake could love him. We left the couple in the last book just having commited to their relationship. This book is wrought with the misunderstandings of a new couple who don't know yet how to communicate. I felt so bad for Thorn from the beginning of the book until practically the last scene. He was trying so hard and so clear how much he wanted the relationship to work. We see his battle with his demons that Arthur doesn't see. Thorn doesn't have the insight we did by knowing Arthur's thoughts. The book is more about these two growing some confidence in their relationship that they both are committed for the long term. I knew a happy ending was coming for the couple, but it was hard to get to it because there wasn't much for happiness otherwise until the end due to the misunderstandings. It's a fairly realistic portrayal of a new relationship.

With it being a novella, there wasn't the chance to see a better progression for the couple's growth that you would see in a longer book. March did something similar in her Bound series with the 4 novellas encompassing more a novel when combined together with the ups and downs of building a relationship. I loved the Bouund series when read all together so might be the thought here as well with some more books later solidifying them and making those "ah, they're in love" moments I saw over the course of the Bound novellas when put all together. If you liked Convincing Arthur, you need to read this follow up and I'm hoping for some happy shorts to add to the series.

The book just had a bit too much angst for me to rate higher. It's a good read but ready yourself for angst.
Tweet