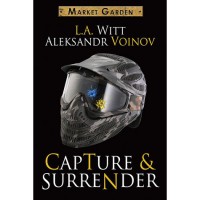 Oh, boy, we get some rent boys, a hot 40 year old, a hot younger military guy, some domination and fantasy capture scenes and one heck of a story. Two guys with a whole lot of tough history come together with one trying to fight the attraction. The paintball scenes were very hot - loved how Stephan knew what he wanted and went after it even when he wondered if he was reading the mixed signals right. Made for some very hot domination/fantasy scenes.

However, this book also packs an incredible emotional punch that I was not expecting. I also enjoyed the longer length of this one - we had time to really get to know these characters and see a story develop. Although I wish we could have gotten some POVs from Stephan (this is written entirely from Frank's POV), it all worked for me and I can't complain much.

I appreciate these authors not only writing a steamy book in a series I have come to adore, but to also take on a tough subject and show the humans behind it. I especially liked that the authors didn't take the easy way out when Frank not only disclosed his positive status, but admitted that it was he who had likely infected his partner. Would have been easy for the authors to blame it all on the dead partner. They didn't and it made the story and Frank's turmoil more believable and real life to have had him being the one living with the guilt. The scene with Chris brought home the fear out there by those in the gay community and how those who are positive still remain somewhat of outcasts. It also brought a very healthy discussion of safe activities into the book.

Going on my favorites shelf for future re-reads. Please tell me there is more to this series - Raoul needs a story!!!!